It was no surprise when Big Guy told me he wanted a Lego Ninjago Birthday Party. He is obsessed with it. First off I needed to come up with an invitation. I found one I liked online and then tweaked it to what I wanted. Here was the end result. Actually when I picked these up from Walmart they told me I was going to need a copyright release form. Guess they did turn out good. Ha! 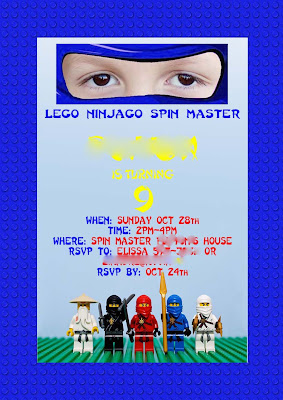 Now for the banner. I wasn't sure what I was going to do and then this idea popped in my head. Big Guy really loved the way this turned out. 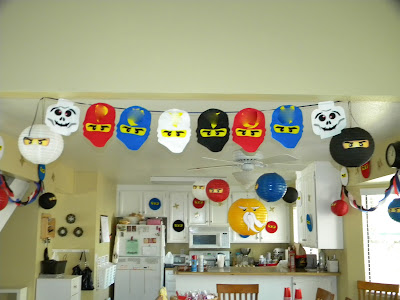 I kept all those Chinese lanterns from Bear's Chinese party and thought maybe I could possibly use them again but the only problem is that they were pink and white. So I thought maybe, spray paint? Yep! It worked perfectly! After spray paint I printed out the Ninjago eyes. I had one giant lantern which I spray painted yellow and made some eyebrows and a beard to make it look like Sensei Wu.
I also found some cheap gold place mats and cut out gold ninja stars. The ninjas all over the cupboards are just dollar store paper plates covered in felt. Cheap easy decorations, I'd say! 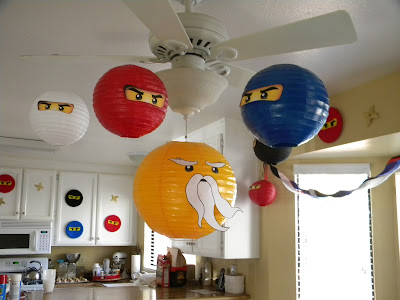 Now for the table scape. 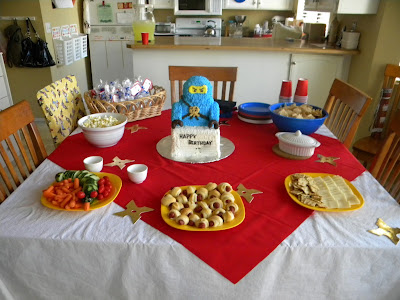 This was my favorite part of the food. 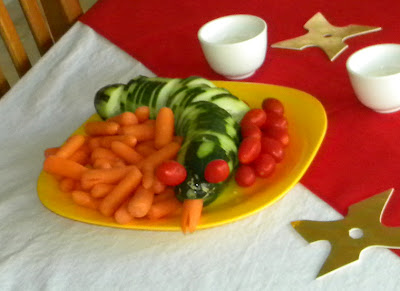 And for the cake. He wanted Jay and Jay is what he got. At least the best that I could do. 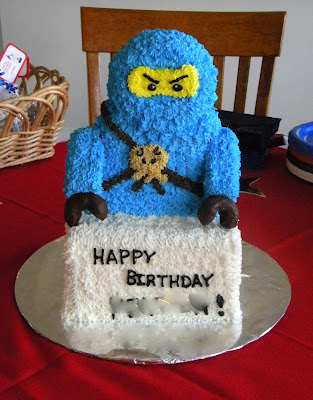 The front room I decorated only a little for where the presents would go. 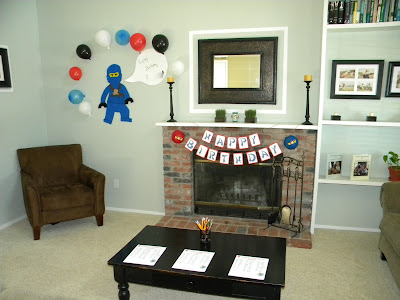 This Jay was made out of poster board, felt and puff paint. 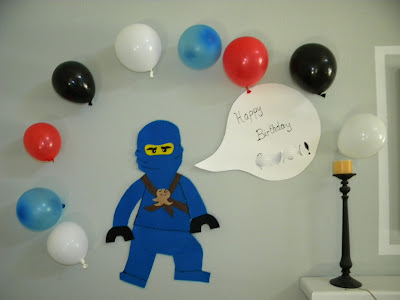 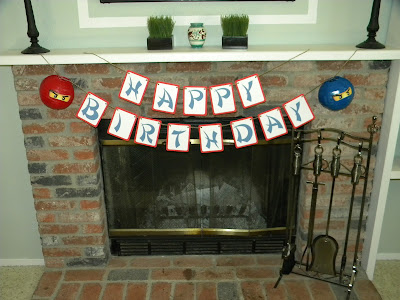 This table was the "What's your Ninja Name" table. 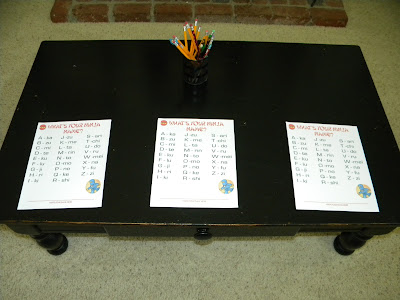 The kids had to take the letters in their names and figure out their Ninja name. 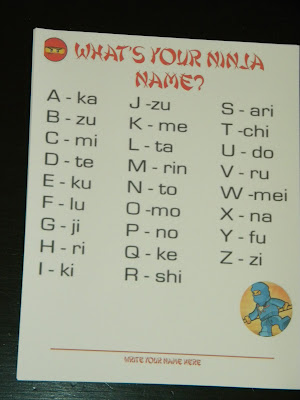 When the guest arrived they were welcomed by Sensei Wu and No-ku-fu-chi-mo-to. Luckily Big Guy's birthday is right by Halloween so I was able to find a Sensei hat at the Halloween store. With a homemade beard, some thrift store pants and a white shirt, Sensei Wu came alive! 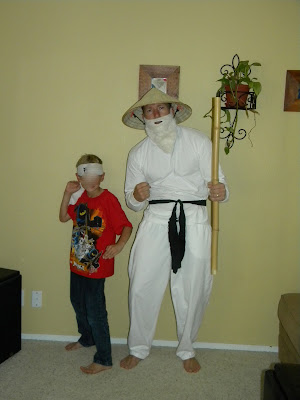 After the guest were greeted the they got their personalized ninja bands that I had made each friend with scrap fabric and a sharpie. 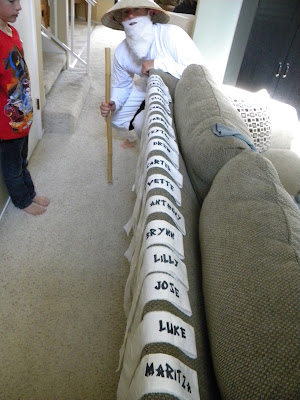 We let the kids play and run a muck until everyone got to the party. Then the fun began!
I printed out this Sensei Wu picture on the computer and then made a bunch of beards so that we could play "Pin the Beard on Sensei Wu." 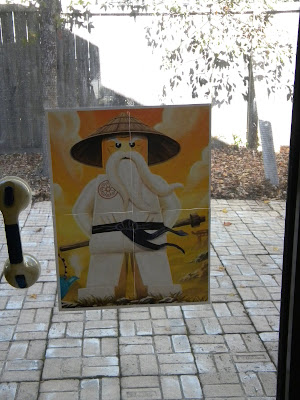 When everyone got their beards I took a picture because I couldn't pass up on a chance to take this photo. Too funny. 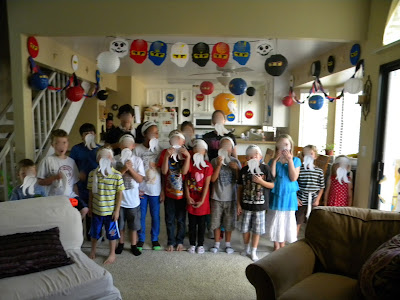 A training session with Sensei Wu. I had made some nun chucks for the kids out of foam tubing stuff I found at Home Depot, some duct tape and yarn  Again super cheap. 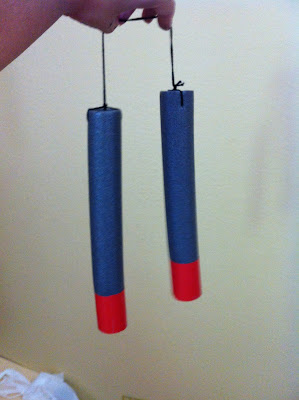 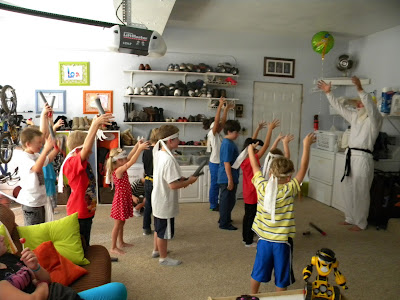 When it was time for the guest to leave they each got a Ninjago Bonezai favor. 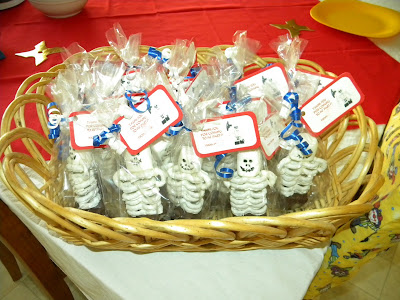 I made these from marshmallows, pretzels and chocolate covered rice krispie treats. 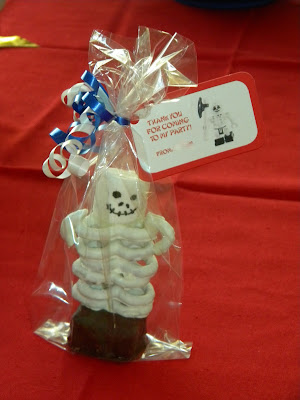